With personal experience of the silent killer, Julie Slack cycled for four days from London to Amsterdam to raise funds, taking two great friends along for the ride.

As soon as she was well enough, the mother of two from High Peak decided to take on the 3 Cities Challenge. Julie tells us about the highs and lows, the unforgettable views and the cheers as she crossed the finished line.

We spoke to Julie about her adventures

What is the three cities challenge?

It’s a four-day bike ride from London to Amsterdam, via Brussels in Belgium.

Was it a tough challenge?

We had our highs and lows of course, but I cycled with two friends so we picked each other up, we help each other out.

London to Dover was tough. You might think the South of England is flat – it’s not, we had to cross the North Downs by bicycle. The weather was perfect though, it was about 18 degrees, sunny, perfect.

Did you have to persuade your friends to cycle with you?

I cycled across Kenya five years ago which was a huge challenge. But after that I became ill and I wasn’t able to exercise for a long time, so when the doctor gave me the all clear to get back out on my bike I decided to take on the challenge. I just mentioned it to a friend and she said ‘oh, can I come?’ I was delighted, and then another friend asked if she could come too!

How did your friends get along?

Because I’d done a cycling challenge before, I knew I could do it, but they hadn’t. They had to deal with all the psychological ups and downs, all the moments of doubt and asking ‘what have I done? Why am I doing this?’ Even I had butterflies on the first morning.

I knew they could do it. They’d done so much training, they didn’t know they were ready, but I did.

What was your highlight of the trip?

On the morning cycling out of Bruges, the support team woke us up at about seven in the morning and sent us out cycling along the canal paths. The sun was just coming up and the way the light hit the water was so beautiful. It was picturesque.

Did you reach your fundraising target?

My target was £1,600 and I just topped £1,700. I did a lot of fundraising events throughout the year – an art show, a fashion show and a dinner. I don’t like to keep asking for money so I made and sold tote bags out of fabric with bicycles on – it means people have something to keep. After the event people would come up to me and give me a donation and say ‘well done’.

Would you do it again?

I’d recommend it to anyone. We were with a group of about 80 people doing the challenge. Everyone has their story, their own reason for being there. Cycling into Amsterdam on that last morning, all wearing the same T-shirts, the reaction was amazing, so many people came out to cheer us on. 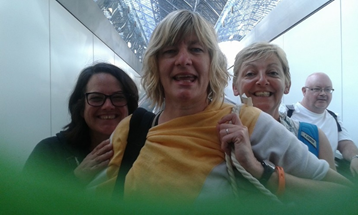 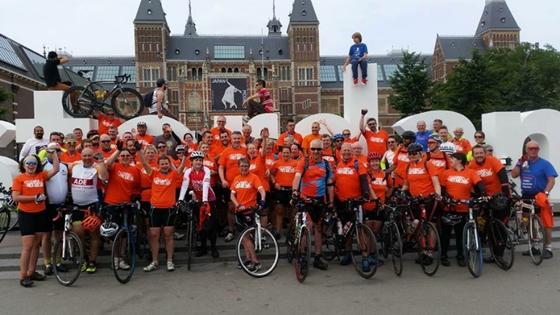 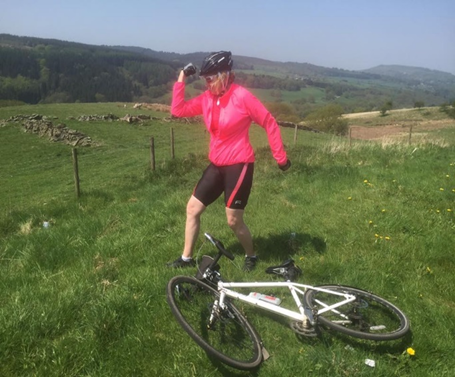