I realised how fortunate I was – David’s story

David couldn’t understand how he could have high blood pressure at only 27 years old, but finds it amazing how one little pill has changed his life for the better. 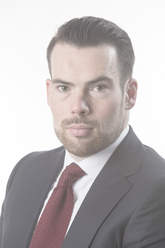 I’d never been worried about having high blood pressure

It all started back in Christmas 2012. I was sitting on the sofa a few days before Christmas when I suddenly felt this excruciating pain in my back. After a few minutes of it coming and going it just went away. It seemed strange but I figured it must have something to do with my kidneys so I thought if I drank a lot of water over the next few days it would clear up on its own.

Christmas day came and went without any problems, but on Boxing Day I passed a fully formed kidney stone.

A few days later I went to my local surgery to make sure everything was okay. The doctor recommended that I have a few tests just to be on the safe side, one of which was a blood pressure test. I'd never been worried about high blood pressure before even though my father had had it.

The test showed I had a blood pressure of 170/95mmHg. My doctor told me this was high and said I would need to make some lifestyle changes to try and counteract it. I knew I was overweight by a good two stone so hearing this was the motivation I needed to kick start the new me.

Getting motivated and getting active

I joined the gym, started watching what I drank and made an effort not to season my food with salt without even thinking. About six months passed and I was doing really well but then slowly started to fall back into bad habits. During Christmas 2013 I went to try on a suit and when I couldn’t fit into my trousers I knew I had to start at square one again.

I started to become quite obsessive with my health. I was going to the gym a few times a week and eating really healthy. By summer 2014 I had lost over two and a half stone, going from 15 and a half stone to just over 13 – which needless to say, I was delighted with.

Through all of this I didn’t really give much thought to the high blood pressure as I thought that by making all these changes to my diet, my blood pressure would lower naturally.

When I went back for a check-up with my doctor I was shocked to see that my blood pressure reading was still bordering on high, even though it had gone down quite a lot from the initial reading. My reading was 140/75, still considered higher than the average person of my weight and lifestyle.

New symptoms and a new round of tests

One day in November I went to pick up my dry cleaning. As I was putting it in the car, it slipped out of my hand. I bent down to pick it up and as I stood back up, I felt dizzy and lost my balance.

Thankfully there was a pharmacy nearby. At first they suggested it could be mild vertigo and some decongestants would straighten me out, but as a precaution, the pharmacist suggested he check my blood pressure.

The reading was high again, so I made an appointment to see my doctor and this time he referred me to a cardiologist at Harley Street Medical Centre for some in depth tests, including an electrocardiogram test, a renal scan, blood and urine tests, 24-hour blood pressure monitoring and finally an echocardiogram, which is designed to see your heart in detail.

Two weeks later, the test results were all fine except for the echocardiogram, which showed the middle wall in my heart was starting to thicken. If left untreated, the wall would get too thick and the gateway to my heart (the right atrium, where blood enters the heart from the veins) wouldn’t be able to open and close properly – which means at some point I would have suffered a heart attack.

The doctor explained that although this could take years, it would be better to start medication straight away to reduce the thickening.

At first I wasn’t happy about this. As a young man, I couldn’t understand how I could suffer from high blood pressure and the thought of being on medication for the rest of my life wasn’t appealing. But then I realised just how fortunate I was to have found this out so it could be treated and I could live a pretty normal life.

Starting blood pressure medications changed my life for the better

Straight away after I took my first pill I could feel a noticeable difference. I visited my doctor the next day and within six hours of taking the medication my blood pressure reading had dropped considerably and I was now considered ‘normal’.

On top of having my first ‘normal’ blood pressure reading in two years, the medication has also made me so much calmer in myself. Before, I felt like I was wired and het up and little things set me off much quicker, now I no longer feel that way. I can even have more effective workouts at the gym as I can keep going for longer where as before, I was reaching my peak quicker.

It has been a long journey getting to this point and I have learnt so much, in particular, knowing that even if you are healthy and fit you can still suffer from high blood pressure so it’s really important to get to know your blood pressure numbers.

It is amazing to think how one little pill has changed my life for the better.