Steven had a stroke three years after he left his blood pressure pills in the bathroom cabinet, but he was determined not to be beaten. Now he cycles across continents. 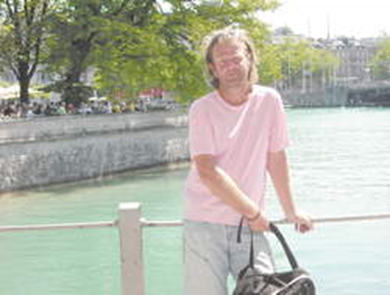 I had never really thought about high blood pressure

In 2006, aged 36, I visited my doctor in Port St Mary, on the Isle of Man, for a check-up. He took my blood pressure and it was then he told me it was too high at 160/90mmHg. He prescribed beta-blockers – medication that lowers your blood pressure by slowing down your heart rate.

I had never really thought about blood pressure before. It seemed like something that happened to the older generation or people who were overweight or unhealthy, and I didn’t feel I was either of these.

I took the medication for a few days but they affected my behavior. I didn't want to do anything or talk to anyone. I felt like a zombie. I put the pills back into the bathroom cabinet and there they remained. I mean, it was only high blood pressure. That's no big deal, is it? Besides, the idea of taking pills for the rest of my life didn't really appeal. After all, that's what old people do.

Three years later, I was planning a bicycle ride from my parent's home on the Isle of Man to the south coast of Spain, but I'd been feeling increasingly nauseous for a couple of months. Two days before I was due to set off, my vision went blurry. I decided to cancel the ride, which turned out to be a wise move. Over the next week the nausea increased and then the vomiting began.

My condition deteriorated. Whenever I moved I would be violently sick. It was time to stop thinking this bug was just going to go away. It was a Sunday and the doctor's surgery was closed so I went to A&E at Noble's Hospital. The doctor on duty took my blood pressure. As she looked at the monitor the look on her face went from confusion to horror.

“You're staying in!” she said. My blood pressure was 210/120mmHg, a value that goes off the scale of those charts that hang from the bottom of hospital beds. I was placed in intensive care. Apparently, I'd had three brain haemorrhages (a type of stroke) brought on by very high blood pressure. As a result of long term hypertension (high blood pressure), my kidneys now only functioned at 60%. I'd been an idiot.

A summer of recovery

In the early days, I had to be careful. If I stood up too quickly my blood pressure plummeted and I could feel I was about to pass out. I usually had enough time to grab hold of something. In hospital one day, I hadn't been so lucky. I'd got up to get a magazine and woke up thirty seconds later with a bleeding face and a corner of the bedside cabinet missing.

I recuperated over the summer and in September, against the wishes of my girlfriend and parents, I set off on the bike ride I'd planned. I wanted to prove to myself this condition didn't have to affect my life negatively. Thirty-two days after setting off, my bike and I trundled on to a beach on the Costa del Sol. I'd cycled 1,600 miles and it had been amazing.

Inspired by this, I planned a more serious adventure. Between 2011 and 2013, I cycled from the Isle of Man to the Isle of Man. That doesn't sound like much, but along the way I rode across every country in Europe. I visited 52 capital cities, from Amsterdam to Zagreb, and cycled 22,000 miles, all at the same time as studying for a couple of degrees and raising money for Blood Pressure UK, the UK's leading charity dedicated to lowering the nation's blood pressure.

The ride was the best idea I'd ever had, but it didn't all go according to plan. I set off several kilos overweight. As the days went on, I got fitter and slimmer. As a result, my blood pressure pills – I set off with over a thousand in my panniers – became more effective.

Taking a lunch break on a bridge in rural France, I stood up too quickly and everything suddenly went foggy. Fortunately, I'd fallen towards the bridge's railings rather than into the road, and I regained consciousness leaning at a strange angle. It was a narrow escape.

I was more careful about my movements from then on. Even with my blood pressure problems I survived the trip, despite the best efforts of a particularly unobservant driver in Ukraine who was millimeters from wiping me out. I've even used the experience to write a book about my ride, No Place Like Home, Thank God, which includes my ordeal with hypertension.

Nowadays, with the help of medication, my blood pressure is back to a healthy level and my kidneys have improved, but they will never be 100%. Don't be complacent about your blood pressure, and if you're told yours is too high then do something about it. I know I was very lucky. You might not be".

Steven Primrose-Smith, 44, from the Isle of Man.