New research finds that two thirds of sliced meats are high in salt, and a quarter are saltier than seawater 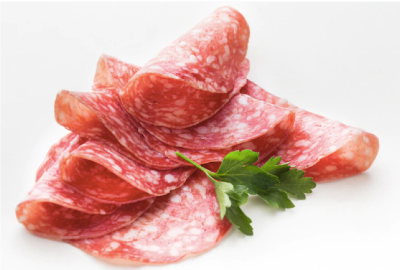 A new survey published by campaign group Action on Salt this January has found that chilled sliced meat products such as ham, chicken and salami are often dangerously high in salt. The team called the lack of progress in reducing salt in these products ‘appalling’ and is calling for mandatory salt reduction targets, with penalties for companies who don’t comply.

Action on Salt surveyed 556 sliced meat products sold by major UK supermarkets. They found that two thirds contain more than 1.5g per 100g – enough to get a red traffic light on front of pack labelling, and enough to affect your blood pressure over time. A quarter are saltier than seawater, and a third failed to meet the voluntary salt reduction targets set by the Government.

Why salty sandwich meats are worth surveying

Salt directly raises blood pressure, which in turn raises the risk of strokes and heart attacks, so eating more than the recommended maximum of 6g a day leads to unnecessary disease and disability. Sliced meats are often eaten by children in their packed lunches, so a high salt content is hard to justify.

Per portion, salt contents varied both because of differing amounts per 100g and because of variation in the portion sizes stated on the pack. Some charcuterie meats contained 2.3g per stated portion and roast ham contained up to 1.73g of salt per portion (3 slices). These equate to about a third of an adult’s recommended maximum salt intake, and more than half of a 4 to 6-year-old child’s. When you add bread, fat spread, and mustard, these amounts are far higher.

Per 100g, salt contents ranged from 0.26g to 6.0g. That’s a 23-fold difference across all products. While some types of meat are bound to be saltier than others, there was huge variation even between similar products, showing there’s no need for them to be so salty.

A lack of progress

The Government have set salt reduction targets for different categories of foods, the idea being that food companies all reduce the amount of salt they add to their products, lowering the country’s salt intakes and therefore our blood pressure and risk of serious illness.

The survey found that one in three products failed to meet the voluntary salt reduction targets. Action on Salt dubbed the progress made in this food category appalling and referred to certain food manufactures as irresponsible. The targets were set in 2006 and have not changed, even though other categories have seen far greater progress and have since have their targets lowered again.

Surprisingly, many products with the highest salt content are exempt from the targets – predominantly charcuterie meats such as prosciutto and chorizo, and traditionally-cured hams such as Wiltshire cured ham. These were often very high in salt. For example, Sainsbury's Italian Prosciutto Crudo has 5.51g of salt per 100g (more than twice the concentration of seawater). However, Sainsbury's Taste the Difference Italian Prosciutto Di Speck, contained 30% less salt, demonstrating that vastly reduced levels of salt are achievable, even in the most challenging of products.

The campaigners are calling for salt reduction targets to be mandated for all products containing added salt, and for these to be reviewed regularly, so that all manufacturers and retailers comply with the targets. The aim is to create a level-playing field whereby all companies have to lower their salt, so that no company is at a disadvantage.

Sonia Pombo, Campaign Manager for Action on Salt, said: “Whilst some salt may be needed in processed meat, there is scope for extensive reductions, as demonstrated by some of the more responsible companies. There’s no excuse. Other manufacturers must now follow their lead and put their customer’s health first.”

Graham MacGregor, Professor of Cardiovascular Medicine at Queen Mary University of London, and Chair of Blood Pressure UK and Action on Salt, said: “Reducing salt is the most cost-effective measure to lower blood pressure and reduce the number of people suffering from strokes and heart disease and life changing disabilities associated with this – all of which is completely avoidable. It’s a disgrace that food companies continue to fill our food with so much salt when there is the option to reformulate, which our research shows can easily be done. The Government needs to force the industry to comply, to ensure that many thousands of people don’t die unnecessarily."

Read more about the survey from Action on Salt.