He was a pioneer who changed the face of medicine but was almost forgotten to history. We share the story of this unsung hero, Dr Nikolai Sergeyevich Korotkov, 1874-1920 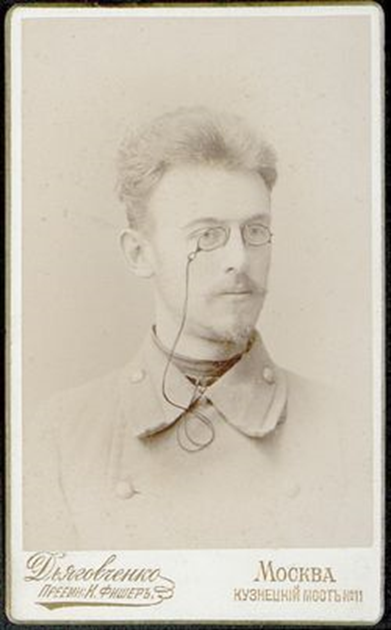 Dr Korotkov survived wars, infectious diseases and harsh Russian winters to make some of the most important advancements in blood pressure history. He was almost forgotten to the annals of history, and even his own son, also a doctor, didn’t know what he’d achieved. That is until medical historians discovered the only surviving photograph of him in the archives of Moscow University and published his biography.

He came to our attention thanks to a two-part feature called The heroes of hypertension, written for our members’ magazine Positive Pressure by our very own Trustee and Medical advisor, Gareth Beevers, Emeritus Professor of Medicine, University of Birmingham. The University of Moscow, where Korotkov was a student, were kind enough to share his photograph with us, and an enlightening manuscript detailing the life and times of this incredible physician which you can download below.

Korotkov was a gifted, studious and dedicated young doctor, but he did not have an easy life. His training years were unpaid and he twice served as a military doctor on the front line during Russia’s wars with China and Japan in the early 1900s. He treated soldiers with gunshots wounds and damaged arteries, patients with infectious diseases such as typhoid, took care of minors in the cold of Russia’s Gold mines, and coped with extremes of heavy rain and intense heat.

It started with a need to treat wounded soldiers
During his time serving in the wars, he found not knowing whether patients with wounded arteries would survive certain treatments unbearable. He dedicated himself to finding a way to predict the outcomes, to be able to choose the right type of treatment. It came down to establishing the health of the surviving arteries, and for this, he needed to measure blood pressure.

He could now establish the health of the ‘collaterals’ – a major breakthrough in surgery which led to rapid progress in cardiology. Not only that, he had developed a way to measure systolic and diastolic blood pressure easily for the first time.

The doctor's health suffered, but his discovery was recognised
After seven years of unpaid work, two wars and extreme conditions, Korotkov developed tuberculosis and travelled with this wife and young son to the Lena gold mines to work as a doctor, and the cold helped to ease his illness. He was unable to take part in the advancing research of the doctors who began to pay more attention blood pressure with Kortokov’s discovery. However, having published his thesis “Experience in determining the strength of arterial collaterals” he was finally awarded a doctor’s degree in medicine.

After further struggles combatting the cholera epidemic and worsening tuberculosis, he returned home to St Petersburg and was granted a post as senior doctor. Feeling wealthy for the first time in his life, he started to enjoy his free time reading and painting, and considered a return to research. But in 1914, the First World War broke out, and Korotkov again became a military doctor.

He faced hunger, cold and hard work and in the summer of 1919, his tuberculosis worsened and he died at the age of 46.

Korotkov's name was almost forgotten
The man who “combined a sphygmomanometer and a stethoscope with a happy marriage” was forgotten for many decades. His son, Sergei, became a doctor too, but for a long time did not know that the method he used daily to measure blood pressure was invented by his father.

In the second half of the 20th century, foreign medical historians searching for information about the inventor of modern blood pressure measurement discovered the only surviving photograph of Korotkov and published his biography, and Korotkov's name became known again.

Remembering this hero of hypertension
Korotkov is remembered now in many ways: in the N. S. Korotkov Memorial Society where a plaque displays his name; the International Prize and Gold Medal award of the Scientific Council of the Military Medical Academy which is named after him; and in St. Petersburg where Doctor Korotkov Street bears his name. His legacy lives on in his simple and accurate method of measuring blood pressure, which changed the face of cardiovascular medicine.

With thanks to the Medical faculty of Moscow University for supplying this manuscript and photograph. Thank you also to Oleg Blyuss of the Wolfson Institute of Preventative Medicine for providing an English translation.

To read Professor Beever’s article, and many more illuminating articles about the history of blood pressure medicine, become a Blood Pressure UK member and receive our twice-yearly magazine, Positive Pressure, along with many more benefits.