During the Pandemic I’ve been having food deliveries every two weeks, to avoid unnecessary trips to the shops. It’s worked out really well, so I’m sharing what I’ve learned about planning meals and shopping lists in case it helps anyone, including some simple recipes - some of which I have invented. They’re not Cordon Bleu, but are very quick and easy. They taste good, and they’re pretty healthy.

If you haven’t used a supermarket delivery service before, I recommend giving it a go. It’s very straightforward, and such an excellent service. I go outside to thank the delivery person and ask them to leave the shopping in the porch, and the delivery is always with a smile.

I am making good use of my slow cooker and breadmaker. If you don’t have these, they are well worth buying. Bread makers are around £60 and slow cookers around £23. Bread flour can be bought online in bulk. I keep a supply of porridge oats (for our breakfasts), dried milk, stock cubes, tins of tomatoes, chilli beans, low salt baked beans, tuna, and pears and cherries in fruit juice. I also occasionally make a large batch of fairy cakes in different flavours, such as with dried fruit or fresh fruit, citrus zest or crystallised ginger, for the freezer. (I’ve not included these items in the costing.)

I’ve never been so organised, am spending less, and my husband and I have both lost some weight. Healthy food doesn’t need to be expensive – this shopping list works out at £3.54 per person per day (it’s from a more ‘upmarket’ supermarket – so probably cheaper elsewhere). Cheaper than some takeaway coffees or burgers, and far lower in unhealthy sugars, fats and salt.

Hopefully there might be one or two tips here which could be helpful. 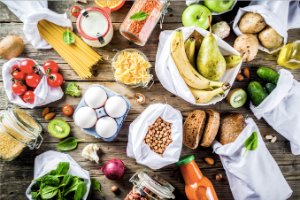 This should be enough for two people for two weeks, but can be scaled up or down.

Poultry, meat and fish
A large pack of skinless chicken thigh fillets
A variety from the £3 for £10 range (I usually order a chicken breast joint and two packs of salmon) Frozen Hereford beef mince
Frozen British beef diced steak
Frozen own brand cod fish fingers
Streaky bacon (if you soak the bacon in water it removes some of the salt, which is better for your blood pressure)
Pâté (or vegetable pate, such as mushroom, squash or root vegetable)

You can swap meat items for meat-free alternatives like Quorn, tofu or extra veg, but don't cook quorn in a slow cooker as in the recipes below. Use a pan instead.

Making your vegetables and fruit last
• Chop any leftover onions and fry them in a little oil and butter, and freeze them in small bags.
• Mushrooms can be cooked in the same way and kept in a sealed container in the fridge.
• Watercress has a short life, so use it for two salad meals, and then use the rest for soup.
• Use the broccoli first, or stand in water in the fridge to last longer.
• Carrots keep well cut into large batons to eat raw (store them in water in sealed container in the fridge). You can also cook them in a lidded pan with butter and a little water. They keep well in the fridge in an airtight container. (Shake the pan, and don’t cook for too long.)
• Iceberg lettuce keeps well in a bag in the fridge. Cut into quarters, leaving the stem intact on each quarter.
• If you stew all the Bramley apples, they keep very well in the fridge in a sealed container.
• If making mash, cook extra for later, and/or save some of the cooked potatoes for potato salad with chives.
• Don’t forget to plant out your chives once you’ve used them up, ready for the summer!

Easy meals
Our first meal could be pan-fried salmon with watercress, tomatoes, beetroot, grapes and rostis. We have toast and half the pate between 2 of us with watercress and tomatoes for lunch the next day. I use the remainder of the watercress  for soup, which will make enough for 2 days.

For another easy meal, I cut two peppers in half lengthways, stuff with tomato and cheese, and bake. These are good on toast.

This is our favourite soup. I use 2 largish potatoes, cut up, 1 bag of my frozen fried onions, 1 stock cube, and water. Simmer in a large pan for 40 minutes, then turn off the heat and empty the remaining watercress into the pan, replacing the lid. When it has semi-cooled, blend until smooth, and add 1 tablespoon crème fraîche.

If there are more than 8 chicken thighs in the packet, I take out the extra ones and fry in a little butter and oil. I use one to make chicken caesar salad with iceberg lettuce (a quarter is enough for 2 people), caesar dressing and homemade croutons, plus grapes and chopped chives. I keep the rest of the cooked chicken for more salads, and keep the raw chicken for a casserole.

The raw chicken thighs go into the slow cooker with a tablespoon of flour, a sliced leek, and 2 tablespoons of crème fraîche, plus salt and pepper. Cook on low for about 4.5 hours, stirring occasionally. This makes its own sauce, and will do four main meals for two.

You can use some of the chicken casserole to make a pie using the ready-made pastry, with cooked mushrooms if you like. Just cut up the chicken first.

I just empty the whole packet of stewing steak, still frozen, into the slow cooker, add a tablespoon of flour, a third of the soffritto mix and of the diced sweet potato, plus seasoning. Add about a small wine glass-full of red wine and the same of water (or just use water) and cook on low for about 8 hours until tender, stirring as it thaws, and then occasionally. You could serve this with mash.

This is fat-free and is plenty for two meals for two. You could use half of this to make a steak and mushroom pie as an alternative to the chicken pie. Alternatively, add some tomato puree and crème fraîche, and mushrooms if liked, and serve it with brown rice.

The easiest way to cook mince! I tip the whole packet of frozen mince into the slow cooker and add about one third of the soffritto mix, one tablespoon of flour, seasoning, and a tin of tomatoes. Cook on low for about 6 hours, stirring as it thaws, and then occasionally. This makes 3-4 meals for 2:

If you use the dough setting on the breadmaker and cut the dough into 3, you can make 2 pizzas and 6 rolls. Use wholemeal bread flour or a mixture of white and wholemeal for a healthier option. Just stretch out the dough on an oiled baking tin and leave to rise.

I make the sauce by simmering some of my pre-cooked onions with a tin of tomatoes and a little seasoning until it reduces and thickens. Top with mushrooms, cheese or whatever you like, and freeze one for next week.

Like the watercress soup, vegetable soups are easy to make in a large pan. Use the rest of the frozen soffritto and sweet potato, plus a chopped leek, carrots, some potato and a chicken/vegetable stock cube to make enough soup for three days. Blend, and add some crème fraîche and pepper. So much better and healthier than tinned!

You can add a tin of tomatoes after cooking to make it a tomato soup. Another alternative is celeriac, leek and potato, but really you can make any variation you like.

Although the watercress needs to be used quickly, the iceberg lettuce, cherry tomatoes, grapes, beetroot and chives all last very well, and can make four salads for two over the two weeks. Have them with egg mayonnaise, pâté, cold chicken or tuna, and serve with homemade bread and soup, or the potato salad.

You've got to have the occasional pudding, and that’s why I included the lemon tart, but it does do us for 2 days! For sponge puddings, put some of the prepared apple and/or summer berries in ramekins and top with a fairy cake. It takes about 1 minute in the microwave. Or make fruit salad with sliced oranges and grapes. There’s also frozen summer berries with yoghurt, and fresh apples.

In the summer I made rolls in the breadmaker which froze well, ready filled if liked, and we could take them on instant easy picnics, with cherry tomatoes, grapes and fairy cakes. We’ve never had so many picnics before – often driving to Swanage and climbing to the top of the hill there, with beautiful views, or meeting our friends each month in the New Forest when that was allowed – even in December, wrapped up warm! We’re looking forward to doing all that again soon, and especially to seeing our lovely families.

This could be a good time to mention the bread recipe, and the simplest way I have found to make it. It takes two minutes to prepare, and then the breadmaker does the rest:

Using a measuring jug which shows ounces or cups, I add one flattened dessert spoon (or one sachet) of dried yeast, then the same amount of sugar. Fill the jug up to the 32 ounce/4 cup mark with a mixture of white and wholemeal flour, including seeds and some oats if liked, and half a teaspoon of salt. Pour this into the breadmaker pan, then refill the jug with water up to the 12 oz/1.5 cup mark, and then add this and 2 tablespoons of oil to the pan. When using wholemeal flour I use the ‘wholewheat’ setting. Then just press ‘start’.

With the other food items in the cupboard, this shopping list adds up to at least 28 main meals, including 6 salads, lots of soups, and as many puddings as you like, for two people for two weeks. It is quite an informal way of cooking, and open to experimentation, but I have found it to work well, with a good variety of meals. I thought I would share it with you, in case it makes life a little easier and a little safer, and gives you some food for thought!