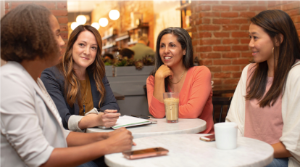 A recent study has shown that a blood pressure of 130/80 to 139/89mmHg raises the risk of hospitalisation or death due to heart attack of unstable angina in women in their 40s, more so than it does in men. While the results of the Hordaland Health Study, published by the European Journal of Preventive Cardiology, have some limitations, they highlight that women as well as men are at risk of heart attacks as a result of high blood pressure, even at a young age and with only mildly raised blood pressure.

There is growing research suggesting that high blood pressure might have different effects on the heart and blood vessels in women than it does in men, and carries a greater risk of heart attacks. Some research indicates a steeper rise in blood pressure during adulthood associated with changes to the arteries, which starts earlier and progresses faster than in men. However, there is little research into younger women and the early stages of high blood pressure.

How was the study done?

12,349 men and women in the county of Hordaland in Norway took part. They had their blood pressure measured along with other risk factors for heart disease such as whether they smoked and their BMI.

They were split into 3 groups according the to their blood pressure:

They were followed up over 16 years to see if they had Acute Coronary Syndromes which include heart attacks and unstable angina.

Note these categories are different to the cut off points used in the UK, where blood pressure over 120/80mmHg and below 140/90mmHg would be considered prehypertension, rather than stage 1 hypertension.

During the follow-up period, more men than women had heart attacks or angina: 5.7% of men and 1.4% of women. This could be expected, but when other risk factors for heart disease were excluded such as diabetes, smoking, body mass index, cholesterol, and physical activity, stage 1 high blood pressure was linked to a higher risk of heart attacks and angina in women than in men.

Having blood pressure of 130–139/80–89 mmHg in the early 40s doubled the risk of heart attack and angina during midlife in women compared to healthy blood pressure, but had no significant effect in men. For women with stage 2 hypertension, the risk was trebled.

The researchers also found that diastolic blood pressure had more effect than systolic.

There are some limitations to the study. In particular: it included mainly Caucasians living in a small area in Western Norway; baseline blood pressure measures were based on a single visit, which does not give a complete picture of blood pressure; there was no exploration of the effects of pregnancy; and no information on antihypertensive medicines during follow up.

While the numbers of people affected by heart disease and dying from it are falling in western countries, this is not true for younger and middle-aged women, for whom there has been a rise in several countries. This clearly demonstrates the importance of research into the effects of blood pressure in women, and this current study adds to that.

“The results add to emerging evidence indicating that high blood pressure has particularly unfavourable effects on women’s hearts,” said Ester Kringeland from the University of Bergen, the lead author on the paper.

Professor Graham MacGregor, Chairman of Blood Pressure UK was quoted in The Times and noted that while high blood pressure is very common, it is often undiagnosed and “women are often forgotten about”.

Notably, blood cholesterol tends to rise during the menopause and the risk of heart attacks rises sharply afterwards. Having multiple risk factors combined will raise the risks further.

Professor Macgregor says: “Blood pressure tends to rise with age and anything over 120/80mmHg is linked to higher risks. This study is important for highlighting the differing effects of blood pressure in women compared to men, particularly at a younger age and at lower blood pressures.

“Whether you are male or female, you can still take control of your health by making healthy lifestyle changes. These the most important way to look after your blood pressure throughout all stages of life.”

Nirmala Markandu, Hypertension Nurse Specialist at Blood Pressure UK, says: “Because heart problems are more common in men, it’s easy to miss the warning signs in women – as there is less awareness. This study adds to the much-needed research into heart health in women, and this should add to the growing awareness.”

Read the full paper for free in the European Journal of Preventive Cardiology.