No such thing as a free lunch, and it’s our health that pays the price 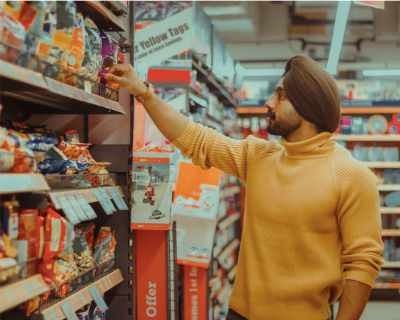 A new survey has revealed that picking up a meal deal for lunch can add more salt to your day than a Big Mac and fries. Nearly three quarters (70%) of the snacks included in meal deals were dangerously high in saturated fat, salt, and sugar, with some contributing a third of an adult’s 6g maximum daily recommended salt intake. Salt raises blood pressure and causes strokes and heart attacks, the biggest causes of death in the UK. As one in three of us buy a meal deal at least twice a week, there is a price to pay for these budget-friendly options.

Campaign group Action on Salt ran the survey for their annual Salt Awareness Week this March and said it is time for stronger measures to improve the nutritional quality of food nationally. For the food industry, that means only including healthier snacks in their meal deals. For the Government, it means enforcing the salt reduction targets designed to encourage the food industry to add less salt to our food, with penalties for companies who don’t comply.

Action on Salt looked at meal deals from eight high street stores, each offering a combination of a sandwich, snack and drink. All eight stores had combinations with more salt than a Big Mac and fries (2.92g). Sainsburys was the best of the bunch, offering the highest proportion of healthier snacks, while Subway and ASDA had the highest proportion (82%) of unhealthy snacks in their ranges. Next up were Co-op and Shell, with more than three quarters of their snacks on offer deemed unhealthy.

When looking at individual snacks, Co-op Lemon and Coriander Green Olives were the worst offender with 2.02g salt per pack – that's equivalent to five portions of salted peanuts and a third of an adult’s maximum daily recommended salt intake of 6g a day.

The table shows examples of how a meal deal can take you up to your maximum for a day, but doesn’t have to. 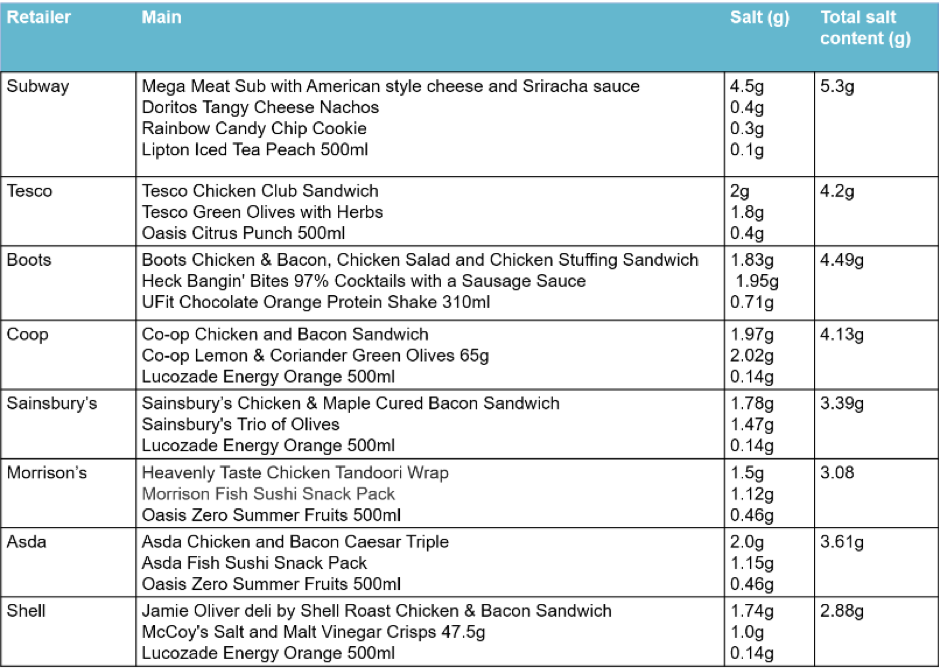 Surprisingly, two thirds (63%) of snacks had claims or packaging that gave them a healthy image, which can mislead customers and deter them from checking the labels more carefully. Peperami, for example, includes health messages: ‘protein kick’ and ‘112kcal per stick’ yet it contains 3.9g salt per 100g – that’s 1.6x the concentration of Atlantic seawater!

“Despite the overwhelming impact on health, many companies appear to have forgotten that salt is a killer. These findings are well and truly shocking, especially given the vast amount of people that purchase these meal deals on a regular basis. In order to shift our food choices to healthier products, we need food companies to provide us with better, healthier and more affordable options. Now is the time for the food industry to act and improve the nutritional quality of the foods they sell, and if they can’t do it voluntarily, then the Government must step in and legislate, for the benefit of our health.”

Graham MacGregor, Professor of Cardiovascular Medicine at Queen Mary University of London, and Chairman of Action on Salt, said:

“Reducing salt is the most cost-effective measure for lowering blood pressure and reducing the number of people suffering and dying from strokes, heart disease and life changing disabilities associated with this – all of which is completely avoidable. Given the fact that food companies have the very simple option to reformulate with less salt and help prevent the many thousands of people who currently die unnecessarily, it’s remarkable that very few companies choose this option. This is why the Government must enforce its comprehensive salt reduction targets without delay.”

Read more from Action on Salt.