I hope someone will think, ‘if he can do it, I can do it’

Steve Rebus lost his sight at the age of just 24 due to high blood pressure, now he’s walking 250 miles during advent to raise money and awareness for Blood Pressure UK

“I decided it was time to get off the side lines again” said Steve Rebus, who is no stranger to a challenge. He took on the gruelling Tough Mudder challenge two years ago despite being registered blind to get into shape and raise money for World Cancer Research Fund (WCRF). Brilliantly, he’s also dressed up as a banana to cheer on runners at their own fundraising events.

Steve’s walking over 20,000 steps a day throughout advent on a safe route near his home in Surrey. “That’s 251 miles which is the same as walking to Derby (my hometown) and back again! So, I’ll be walking the ‘Epsom Derby’. I only realised how far that is after I started fundraising and contacted Blood Pressure UK. I thought, ‘well, I’ve done it now!’”

Steve lost his sight due to high blood pressure

Steve lost his sight in 2000 due to two brain haemorrhages (bleeding in the brain) caused by high blood pressure. “I was repairing cars in a body shop when I realised I couldn’t read a number plate. I didn’t think much of it but then the headaches started and eventually I couldn’t make it up the stairs. One morning I woke up and could barely move. My blood pressure in hospital was 280/220mmHg.” The bleeding damaged his optic nerve and knocked out his central vision, leaving him with only blurry peripheral vision.

He’s been on blood pressure medicines ever since, and learning to take care of his health has been a life-long journey. “When you lose your sight, you lose everything you can do. You can’t even make a cup of tea. I went from playing football and going to the gym to not able to exercise.”

Taking control of his health

Since his wife Sarah started working for WCRF, he’s learned the difference a healthy diet and exercise can make to your health and happiness. He’s learned about the right balance of nutrients for his body, watching the calories (“they sneak them into everything”) and how to exercise safely. He’s recently received his 50lb weight loss badge from FitBit, a wrist band he uses to track how far he’s walked, and his doctors have lowered the dose of his medicines.

Steve wants everyone to know their blood pressure numbers

Ready for a new challenge, Steve wanted to raise awareness of high blood pressure no matter what your age. “I wouldn’t wish the consequences on anyone. It’s so easy to get a blood pressure check and know your numbers, just go to the chemist or get a home monitor, then you can relax.

“If I can inspire one person to get out and get active it’s worth it. I hope someone will think, ‘if he can do it, I can do it.’”

Steve adds, “I believe that the greatest gift you can give your loved ones and the world this Christmas…Is a healthier you!”

We are incredibly grateful to Steve for his extraordinary efforts. You can join us in cheering him on and make a donation at justgiving.com

Steve is updating us on his progress daily with his brilliant blog, Fitblitz. In the last few days alone he’s encountered sore muscles, an app crash, torrential rain, unsurpassable muddy puddles, getting lost, then making it home to some high protein pizza. 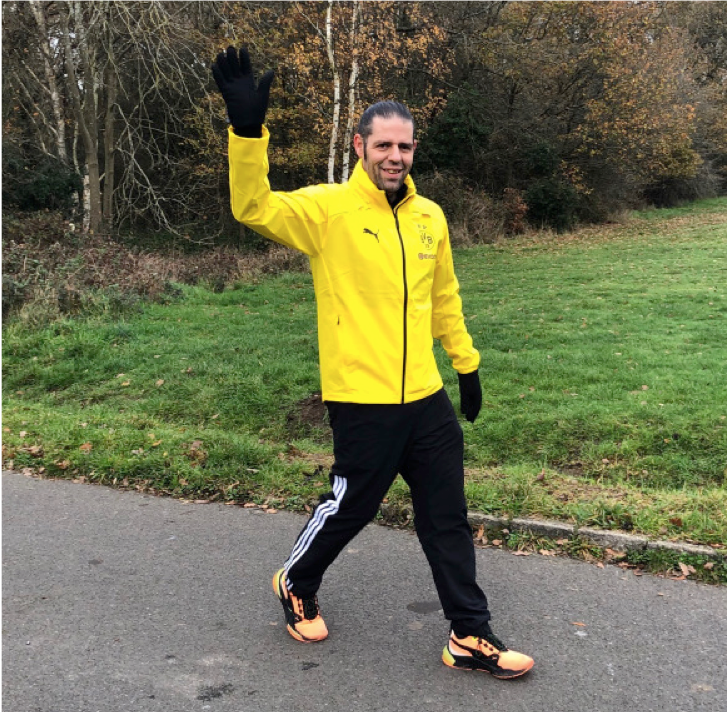