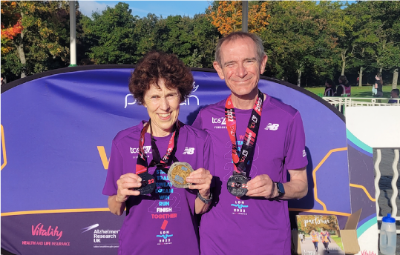 Colin and Kate from Swindon completed the London Marathon in an impressive sub four-hours on Sunday 2 October, raising up to £2,500 for Blood Pressure UK. Colin called it a “real experience” running past London’s iconic landmarks accompanied by runners from all over the world, including fancy dress gorillas, Wonder Women, a tree, and six people dressed as fruit in a home-made fruit basket.

Colin was our official charity runner while Kate earned a ‘good for age’ place and is also donating her funds to Blood Pressure UK. After completing much of their training together, the pair had different start times and places so they ran the course separately but were cheered on by friends and finished within minutes of each other, reuniting at the end.

Colin chose to run for Blood Pressure UK having been diagnosed with high blood pressure by chance in his 30s which is now well controlled with medicines. He knows he was lucky to get a diagnosis, as high blood pressure usually has no symptoms but can lead to heart attacks and strokes.

He and Kate are both in their 60s but say they are as active now as they were in their 30s, and are known in their communities for their long walks and running challenges.

They’ve been clocking up the miles for the last few months in preparation for the big day. About his long training runs, Colin said “it’s alright once you get going, the hardest part is putting your shoes on.”

Asked if he’d take on another marathon he said “Yes, I will do it again. It’s actually really enjoyable. It’s a real experience that you don’t get anywhere else. The runners are really friendly. The organisers are incredible. You’ve got to put a bit of work in but you can look back and say, I really enjoyed that. Thank you to Blood Pressure UK for this fantastic experience. It’s really special.”

Phil Pyatt, CEO of Blood Pressure UK said: “A huge thank you goes to Colin and Kate for the sheer effort you have put in to training for the big day, raising funds for Blood Pressure UK, looking after your own health and inspiring others to do the same.”