Our very own Mark Hooley and friend Al Turnbull celebrate the end of the ultimate bike ride – the infamous journey from Land's End to John O'Groats. 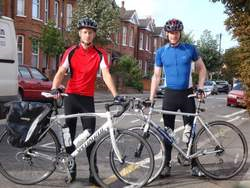 They took on British weather, British drivers and – worst of all – British roadworks to cover the length of Britain in just 12 days, battling through cross-winds, broken spokes and aching knees to lower the nation’s blood pressure. 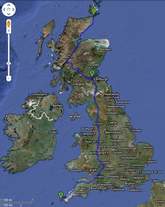 As they took on the infamous stretch from Land's End to John O'Groats, they knew they had to

Mark, our Projects Officer, knows how important it is for people to look after their blood pressure, as he organises the UK’s biggest blood pressure-testing event, our Know Your Numbers! Week.

He says: “Each year during the event we test the blood pressure of around 250,000 adults. Of this, over 90,000 people are found to have high readings but often have no idea, as the condition is symptomless.

"I see first-hand how we help people with high blood pressure – the biggest cause of death through the strokes and heart attacks it causes.

“I would like to appeal for people to sponsor us, as the money raised will help us continue to provide fantastic support to help people get control of the condition and, ultimately, save lives."

Mark says: "Today went well. It was tough, but good – though we saw the waterproofs for the first time!"

Mark says: "Today, strangely, felt good after the demands of yesterday! Cycling through Cheddar Gorge was beautiful and the first 20 miles were very flat – which made a welcome start to the day. The scenery was lovely all day. And the bonus was that I got to see my parents in the evening."

Mark says: "Today was much longer than planned and included a big hill in Ironbridge. It took us so long that we arrived at our destination in the dark.

"I think this trip is taking more out of us than we expected: Al just asked me if people are getting stranger or if we are getting more tired! Tomorrow evening we are meeting up with Al's parents – perhaps we'll find out then..."

Mark says: "Our days of beautiful countryside came to an abrupt end today as we hit pot-holed 'A' roads, Manchester and the traffic lights of Bolton!

"The end of the day brought visual release with the Pennines looking stunning.

"We think the next couple of days are likely to be hilly and we should see Hadrian's Wall tomorrow."

Mark says: "Going through the Yorkshire Dales into Cumbria was stunning but hard work. The day-long head wind made it tough going. It was the first day I struggled mentally.

"Disaster (ish) struck 25 miles from the end of the day when a spoke in my back wheel snapped, which meant nursing the bike to Brampton. Darkness quickly came and it was quite surreal cycling through the depths of Cumbria with just our bike lights and no street lights anywhere near.

"After seeing the A69 with Friday night traffic on, the major road from Carlisle to Newcastle and full of fast traffic and no street lights(!), we decided to stay in Brampton rather than the hostel in Greenhead and found a very nice B&B, and avoided the A69."

Route: Brampton – Hawick (Altered due to broken back wheel the day before)

Mark says: "Because of the disaster yesterday, we had to take the bike in to be fixed this morning. We got the spoke fixed in a bike shop in Carlisle on Saturday morning and Al got new brake pads fitted. We didn't leave Carlisle till 10.45am, so decided to take two days to cycle up to Edinburgh, rather than one.

"Which has meant we will have two nice days of very gentle cycling and covering only 50 miles on each of the days. It also means that we will get to John O'Groats a day later.

"Today we are aiming for Hawick – the journey might be shorter, but it is going to be very hilly!"

Route: Hawick – Edinburgh (Amended due to broken back wheel)

Mark says: "Last night was a real boost: I managed to see Forest beat Newcastle in a pub in Hawick. (Apparently pronounced Howke! All rather odd)

"Today has been a pleasant break from all the hassles and hard riding – only 50 miles today. Tomorrow we're back to riding more than 80 miles a day... Not sure that I'm looking forward to that.

"Thank you all for your messages of support and donations – it really means a lot."

Mark says: "Today was absolutely stunning!!! Wonderful scenery, made even better with the autumnal colours, and the fog and rain added to the mystique.

"My left knee started to hurt five minutes into the day, which came as a relief for Al, as his has been hurting for a few days now!

"Think the next few days are hopefully relatively easy with a 75 miler and then a 65 miler, before 110 miles on the last day – bring it on!"

Weather conditions for day: Sunny, then cloudy with possible drizzle or rain

Mark says: "Today was stunning, especially around Glencoe. We had a great wind behind us in the morning, which meant we flew along. That all changed in the afternoon and we were pleased to get to Loch Ness in decent time."

Mark says: "Today saw another broken spoke on my bike that Dryburgh Cycles in Dingwall fixed, o we were able to push on to Lairg. Now we only have 75 miles to John O'Groats tomorrow and we'll have done it!"

Total: 985 miles (+ detours and back tracking for repairs taking the whole journey to 1000+ miles)

Weather conditions for the final day: Rain, rain and rain – who knows, perhaps there is a pot of gold at the end of the rainbow?

Mark says: "This is the final instalment – we are all finished!!!

"We got to John O'Groats just before 6pm and today was very tough. We went up the east coast and the wind was battering us all day. In fact, we had to lean into the wind to stop our front wheels from going from under us. And a few times the wind dragged us into the kerb. After lunch the wind let up and we raced along.

"Thanks for all the messages of support, and we're now going to have a few drinks!"

Make a donation to support all our lovely fundraisers.